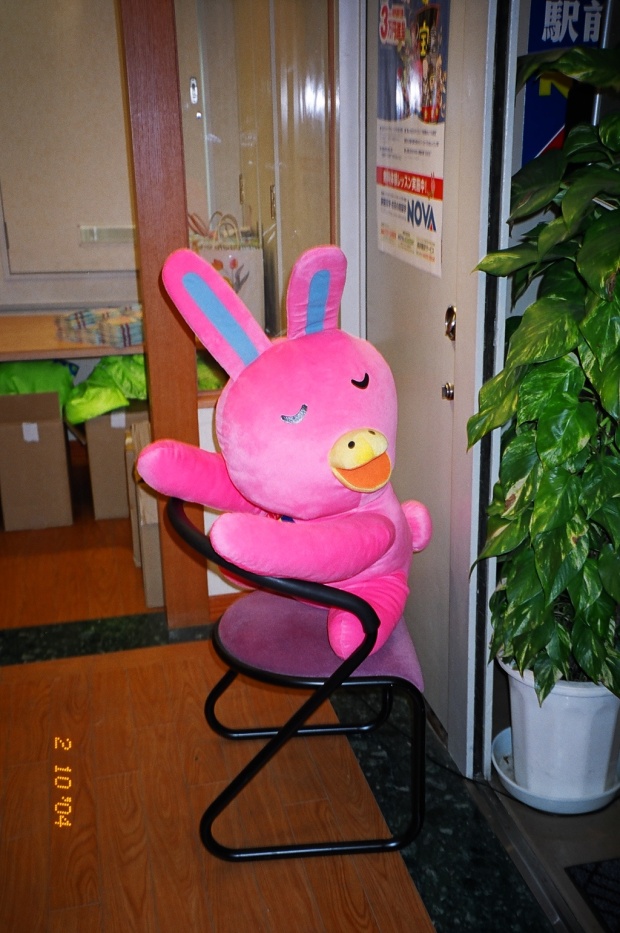 Nova Usagi – the worst mascot ever

The picture above is of NOVA Usagi (NOVA rabbit), the horrible mascot of NOVA’s language school. It is supposed to resemble a pink rabbit with a bird beak. The idea behind it was that the rabbit ears represented listening well, and the bird beak represented talking well. To me it looks like a mutated Pokemon that needs to be destroyed with fire, but what do I know?

NOVA Usagi is well known all over Japan, and you can’t look in any direction at a NOVA school without seeing it’s stupid face. At work I was teaching Voice class (an open conversation room for students of all skill levels), when I was suddenly inspired with a good topic; finding a replacement for NOVA Usagi.

There were 5 talkative students in the Voice room, and I asked them to come up with ideas for a new mascot. Many animals were suggested, narrowed down, narrowed again, and we finally had a showdown between the two front runners; monkey and turtle. I then broke the class into teams and got them to come up with ideas to defend their animal. After a brief debate, Shelly the NOVA turtle won. It was one of the best Voice classes I have ever taught, and the students seemed to have fun too.

On a side note, I asked why nobody had suggested panda, and all 5 students (at the same time) shouted “PANDAS SPEAK CHINESE, NOT ENGLISH!!!” like it was the most obvious thing in the world. I guess that’s why I have trouble talking to pandas.

This entry was posted on January 17, 2014, 8:00 pm and is filed under Teaching English. You can follow any responses to this entry through RSS 2.0. You can leave a response, or trackback from your own site.