Posted by Barniferous in Life in Japan on January 4, 2017

There was no rain when I left for work today, but it was absolutely pouring when my shift was over. I didn’t have an umbrella with me, but an umbrella likely wouldn’t have been much help anyway. I decided to just bike home as quickly as possible. Fun fact: Japanese people give you some very strange looks when they see you riding a bike home with no umbrella in a downpour.

By the time I got home all of my clothes were soaked right down to my underwear. I was actually able to pour water out of my shoes!

Rain is serious business in Japan.

Of course it has to rain on my day off. I call BS on this weather!

Posted by Barniferous in Life in Japan, Shizuoka on December 4, 2014

This morning I slept through my alarm, and woke up in a panic without much time to get ready. I managed to get showered, shaved, and dressed in about 20 minutes and then rode my bike like a crazy person to catch my train and get to work on time.

After work it was pouring rain. This was my first time to attempt to ride home in the rain. I rode my bike on a narrow, busy street while attempting to hold an umbrella. My bike light wasn’t working, I wasn’t wearing a helmet, and despite the umbrella my glasses kept getting wet. Looking back, it wasn’t the smartest decision to try to ride my bike under those conditions.

I survived the ride home and rewarded myself by watching the K-1 Grand Prix on TV with my roommates. For those who don’t know, K-1 is a kickboxing based sport which has become incredibly popular in Japan. The Grand Prix is a one night tournament, with each fight having 3 rounds of 3 minutes each. K-1 boasts an 80% KO rate. Even if you know nothing about kickboxing, it’s easy to figure out what’s going on and to enjoy the show.

A rainy day in Kamakura.

Today was the last full day in Japan for my visitors. Breaking with our trend, we all actually got up early. The plan for the day was to meet The Penpal and her friends in Kamakura and see some of the sights. It was raining steadily as we left Hello House for the station.

We met up with The Penpal and friends, and got a quick lunch before sightseeing. During lunch, Flounder was trying to teach some rude English to the Japanese people in our group. He was trying to convince them that “motherf**ker” was a commonly used word between friends, and provided various examples. I think Flounder believes that we all live in a 70’s blaxploitation film.

After lunch we started our sightseeing at Hachiman-gu shrine. Despite the rain we saw yet another traditional wedding. From Hachiman-gu we walked to Daibutsu. By this point the rain was bucketing down and we were all soaked, even with umbrellas. Almost nobody carries an umbrella in Winnipeg, so Code Red, Hippie, Green and Flounder were all having umbrella fights as we walked.

At Daibutsu we spent most of our time under cover trying to stay out of the rain. Since the rain didn’t let up, we decided to go back towards the station and find an indoor activity to do. We went to – you guess it – another game center. The game center had a large selection of print club machines. Print club machines are large photo booths that are popular with teenage girls. You can take your pictures with various backgrounds and then draw on the pictures or add cute pictures. At the end the machine prints out copies of your pictures. We loaded all 8 guys in our group into the print club machine and took some ridiculous pictures. After the game center, we found some nearby karaoke where we sang and ate.

We returned to Hello House soaked to the bone after a fun day. Going to Kamakura is always good, but today was was even more exciting because I got to introduce my girlfriend to my friends.

Posted by Barniferous in Greater Tokyo Area, Life in Japan on October 13, 2013 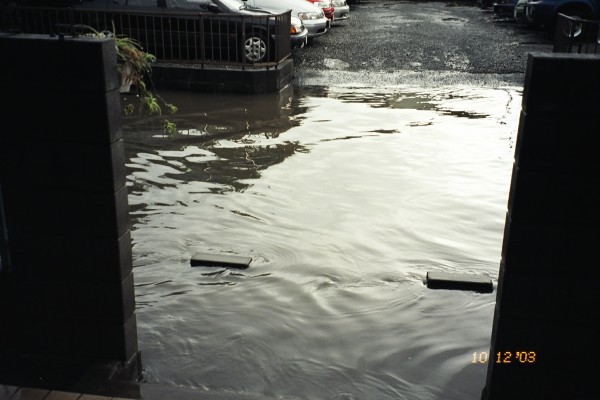 Happy Thanksgiving everyone! Well, its Thanksgiving in Canada today, and some sort of holiday here. But did I get any turkey???

It rained like crazy this afternoon. When the rain finally stopped, the water in the street was close to 30cm deep! I got some good pics which I will get around to posting when I can. The drainage in my neighbourhood leaves a little to be desired.

I was bored this evening so I headed to downtown Kawasaki to my usual internet cafe. Some scary lady was trying to hit me up for cash outside the front door. I just played the “gomenasai” (sorry) card and tried to walk away. She kept asking, saying something about her being a “kawaii onna” (cute woman). I respectfully disagree. I hope she is gone when I leave. I have to stop going to downtown Kawasaki at night.

Update from a few days later:

Well, the crazy lady was gone when I left, but the underground mall that I normally walk through was closed. So I had to navigate downtown Kawasaki at night and find my way to the station. I caught the last train with minutes to spare!