Posted by Barniferous in Visitors, Western Japan on August 13, 2016 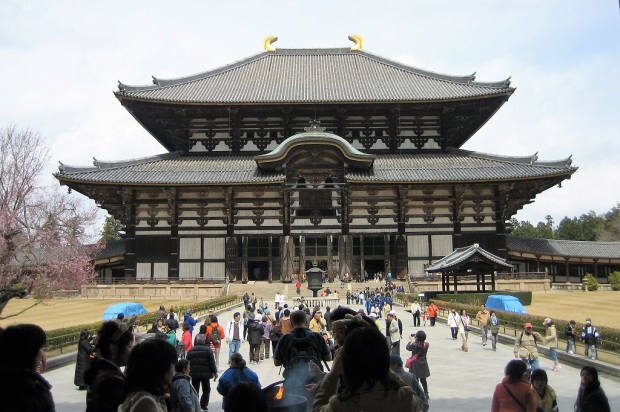 Today my parents and I visited Nara, which was another city on my “must see before I leave Japan” list. Nara was the capital of Japan from 710 – 794, and is home to some very old and very impressive buildings from Japan’s past. Conveniently, Nara is just slightly west of Osaka and almost directly south of Kyoto. The greater Tokyo area has lots of fantastic places to visit, but you can’t beat the Osaka / Nara / Kyoto triangle for history.

Todaiji is one of the world’s largest wooden buildings, despite the current construction being 30% smaller than the previous version. It was originally finished in 751 AD, and nearly bankrupted the country due to the high cost of construction. The current building dates back to 1709, which is still pretty freaking old by Canadian standards.

When you see Todaiji from a distance it’s hard to get a sense of how immense it truly is, until you focus on how small people look right in front of the entrance. The inside of the building features the largest bronze Buddha statue, along with other very impressive artifacts that you’d find in a 1000+ year old temple.

My parents next to the giant bronze Buddha

After Todaiji we visited Kasuga Taisha, Shinto Shrine from the time that Nara was the capital of Japan. The shrine itself was good, but the treasure room inside was really interesting. We happened to be there on the last day of a display of 1000 year old Japanese picture scrolls. We also saw giant ceremonial drums that were over 900 years old.

I always enjoy thinking about the stories behind some of these very old artifacts. How many different people have seen them or touched them over the years? How did they survive wars, fires, storms, earthquakes? For me it’s easier to really connect with something a few hundred years old than millions of years old. We only saw a few of the highlights in Nara, but they were all fascinating for me and I wish I had more time to see everything.

Posted by Barniferous in Friends and coworkers, Greater Tokyo Area, Visitors on January 16, 2016

I was confused when my friend UPS woke me up. I was not on my comfortable futon in my room. I was also not on my slightly less comfortable floor couch. I was sleeping on the hard floor in my coworker Vivian’s room, still wearing the same clothes from the day before. UPS wanted to get going before having to engage in any awkward conversations with Chrissy, Vivian’s roommate that he became “acquainted with” the night before.

We walked back towards my apartment, and I was unfortunately not able to get a straight answer on how his night went. We ate, got cleaned up, packed, and took returned to the train station, bound for Kamakura.

At this point in my 2 plus years in Japan, I have been to Kamakura several times, however it never stops being an impressive and interesting place to visit. UPS and I went to see Daibutsu, the giant bronze Buddha statue, and Hase temple. I was able to pass along a lot of the information I had learned from previous visits, and also got an impressive picture with giant Buddha’s sandals!

From Kamakura we went to Yokohama, then took Minatomirai line towards the Minatomirai area. We spent a long time wandering around both the port area and Yokohama Chinatown, stopping for some great food. The Chinatown area is very energetic at night, and despite being in Japan, feels like you have wandered into a different country.

After exploring for some time, we decided to continue on to our evening destination: Roppongi.

A rainy day in Kamakura.

Today was the last full day in Japan for my visitors. Breaking with our trend, we all actually got up early. The plan for the day was to meet The Penpal and her friends in Kamakura and see some of the sights. It was raining steadily as we left Hello House for the station.

We met up with The Penpal and friends, and got a quick lunch before sightseeing. During lunch, Flounder was trying to teach some rude English to the Japanese people in our group. He was trying to convince them that “motherf**ker” was a commonly used word between friends, and provided various examples. I think Flounder believes that we all live in a 70’s blaxploitation film.

After lunch we started our sightseeing at Hachiman-gu shrine. Despite the rain we saw yet another traditional wedding. From Hachiman-gu we walked to Daibutsu. By this point the rain was bucketing down and we were all soaked, even with umbrellas. Almost nobody carries an umbrella in Winnipeg, so Code Red, Hippie, Green and Flounder were all having umbrella fights as we walked.

At Daibutsu we spent most of our time under cover trying to stay out of the rain. Since the rain didn’t let up, we decided to go back towards the station and find an indoor activity to do. We went to – you guess it – another game center. The game center had a large selection of print club machines. Print club machines are large photo booths that are popular with teenage girls. You can take your pictures with various backgrounds and then draw on the pictures or add cute pictures. At the end the machine prints out copies of your pictures. We loaded all 8 guys in our group into the print club machine and took some ridiculous pictures. After the game center, we found some nearby karaoke where we sang and ate.

We returned to Hello House soaked to the bone after a fun day. Going to Kamakura is always good, but today was was even more exciting because I got to introduce my girlfriend to my friends.

Posted by Barniferous in Greater Tokyo Area, The Penpal on October 5, 2013

Today I went to Kamakura. Kamakura was the capital of Japan in the first two hundred years of the Bakufu (military) government. It is just south of Yokohama. I met The Penpal there. We went to a Shinto shrine where I was attacked by pigeons shortly after getting a “best luck” fortune. We also saw Daibutsu (Great Buddha) which is huge statue of Buddha built in the year 1252. It has been restored and rebuilt over time when it fell because of earthquakes or tidal waves. We finished the sightseeing at a Buddhist temple which was absolutely beautiful. More info when I have the proper names of the places I went to available. In Kamakura we saw a New Orleans style Jazz band playing in the street. Overall, a great day.

I met The Penpal at Ofuna station. I asked her to look for me, because I am very easy to find in public. Also, I had not seen a good picture of The Penpal before, so finding her would have been nearly impossible.

The Penpal made a very good tour guide, taking me to Daibutsu, Hachiman-Gu Shrine and Hasedera. There were good English signs in the area, but she knew a little more about each place than was explained on the signs. After sightseeing we went to Baskin Robbins near Kamakura station. We got ice cream and talked for almost two hours. Since we had been emailing each other for over a year, we were fairly comfortable with each other and it was more like a meeting of old friends than almost strangers.

Posted by Barniferous in Greater Tokyo Area, Return to Japan on July 20, 2013 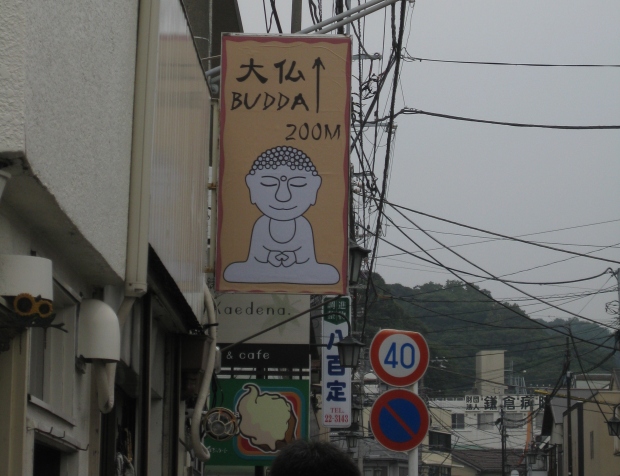 A sign in Kamakura that is trying to explain that the Big Buddha station is 200 meters ahead. Looks like “Budda Zoom”.

On July 13 The Wife and I went to Kamakura to meet her friend and husband. I have been to Kamakura many times before, and it is always interesting every time. This particular day was hot, humid and sunny. Since my shorts were in the wash, I was stuck wearing jeans which allowed me to slowly cook through the day like a Thanksgiving turkey.

From Mishima station we took Tokaido line to Ofuna station. At Ofuna we changed to the Yokusuka line and had a short ride to Kamakura. We met The Wife’s friend at the station. Kamakura gets a lot of visitors from other countries, but with my blond hair and giant nose I stand out like the proverbial sore thumb. I am always easy to find in busy train stations.

From Kamakura station we got on the Enoden line. The Enoden line is a unique experience because it is so narrow and essentially winds its way through people’s back yards. I got off the train at Wadazuka and nervously followed The Wife and friend along side the tracks to a hidden dessert restaurant. Seriously, if a train had come we would have had to flatten ourselves against the wall. The restaurant itself was beautiful and served fantastic traditional Japanese sweets at low tables with tatami mats. For the record – I do not recommend walking along busy train lines looking for hidden restaurants.

After another scary walk beside the train line, we took a train to Hase station and began the walk towards Daibutsu, the giant Buddha statue of Kamakura. Along the way we encountered endless souvenir shops and restaurants. Among the highlights were a Turkish Donair Kebab restaurant, an ice cream shop where US President Obama stopped for Ice Cream and several stores that sold gummy Buddha candies. The Wife happily bought some gummy Buddhas as a souvenir, but I had mixed feelings on the issue. Imagine the controversy if someone sold gummy Jesus candies at the Vatican, or gummy Mohammad candies just outside of Mecca. I don’t think people would be impressed even if they saw that the gummy candies were available in 4 different flavours.

I have been to Daibutsu before, but it is still an impressive sight every time. It was built in 1252 out of bronze and stands over 13 meters high. It has survived tsunamis, earthquakes, wars and millions of tourists, only needing a little rebuilding and reinforcing from time to time. If you are visiting the greater Tokyo area, Kamakura is always a worthwhile stop.

Leaving Daibutsu, we took a sweaty walk down the street and made our way to Hase Dera, home to a massive wooden statue of Kannon. The temple grounds are elaborately landscaped with lush trees and flowers. Like Daibutsu, I had been to Hase Dera before, but never in this season. The trees were almost overwhelmingly green and delicately manicured. The grounds are also home to some beautiful stone statues and a cave with carvings of different gods inside.

On the way home we treated ourselves to the Green Car on Tokaido line. The Green car has reclining seats with tray tables like the Shinkansen, but is just a part of the regular train. We ate sushi bentos from Ofuna station, which has a huge selection of restaurants and bento shops. I love sushi, but sushi where the fish came out of the ocean that morning is light years ahead of sushi made from frozen fish. I also treated myself to a Chinese meat bun (nikuman) because it’s been way too long since I had one.

We returned to Numazu and I immediately peeled off my still damp clothes and took a shower. Summer in Japan is WAY too hot and humid especially in a popular tourist area full of people.