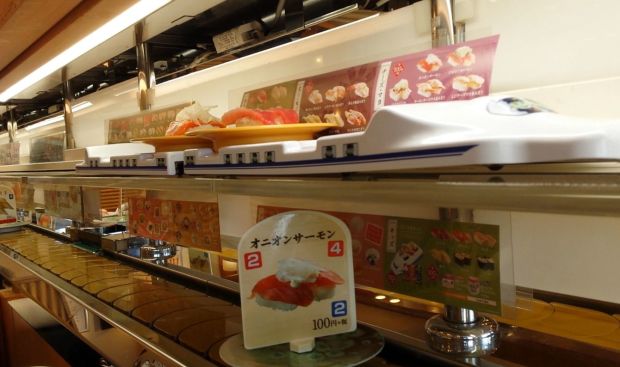 Today before embarking on a trip to Izu, we stopped for lunch at the Mishima branch of Kappa Sushi, a kaiten sushi restaurant.

Kaiten sushi, also known as conveyor belt sushi, is a fun way to eat. The restaurant will have some form of conveyor belt or train where plates of sushi come by. If something looks good, you simply take it from the belt and eat it. Depending on the restaurant, each plate will have the same price or the plates will be colour coded indicating how much each costs.

Kappa Sushi has a long snaking conveyor belt which winds its way up and down rows of tables. To ensure that people at the end of the belt can still get what they want to eat, there is also a bilingual computer ordering system at each table. You can use a touch screen to place an order which will then be delivered directly to your table on a special train.

The Penpal and I have been to kaiten sushi many times, but today was the first time for Tiny Dog. Little plates of sushi coming by on a belt or by train is very exciting for a 3 year old! He was a big fan of maguro (tuna) and cucumber rolls. I ate way too much, which is exactly the right amount to eat when on vacation.

This entry was posted on June 26, 2017, 7:35 pm and is filed under Return to Japan, Tiny Dog. You can follow any responses to this entry through RSS 2.0. You can leave a response, or trackback from your own site.