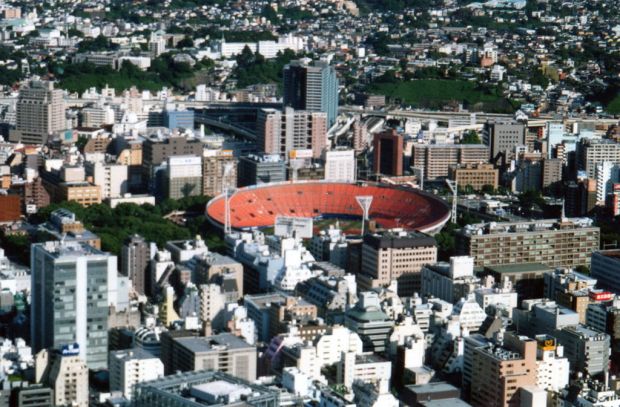 A view of Yokohama from Landmark Tower

Today I took my family to Yokohama. We took the Nanbu line from Noborito to Kawasaki, Tokaido Line from Kawasaki to Yokohama, and then switched to the still shiny new Minatomirai line to finish our trip to Minato Mirai station.

I had been to Yokohama several times before, but this was the first time I had ever gone inside Landmark Tower, Japan’s tallest building. There is an observation level on the 69th floor that is accessable by one of the world’s fastest elevators. The observation level offers amazing views of Yokohama, Kawasaki, Tokyo and on a clear day, Mt. Fuji. The ocean is on one side, and there is continuous city in every other direction as far as you can see. My family was feeling a bit overwhelmed by the neverending city.

From Landmark Tower we wandered around the Minato Mirai area. My mom bought a Hard Rock Cafe t-shirt, and I made sure to show off the dog walking video game at the nearby game center.

After exploring Minato Mirai, we took the train to Yokohama Chinatown. We spent a long time walking around the streets and enjoying the buildings. My mom and sister requested that we stop in a large tea shop. There were different kinds of tea from around the world from floor to ceiling. While my sister tried to communicate with the store owner, the owner’s young daughter (maybe 5 years old) came up to my mom and started talking to her in Chinese. My mom responded in English, so the conversation really didn’t go anywhere. My mom ended up giving the young girl a Canadian flag pin, which got a nice smile and some thanks from the owner.

My family enjoyed their day in Yokohama. Even though I did a very similar visit with my friends a month ago, I still had fun. Yokohama is a great place to visit.

(2014 Update) In 2014 the Abenobashi Terminal Building opened in Osaka, which is about 4 meters taller than Landmark Tower. Landmark Tower is now number two in Japan.

This entry was posted on July 20, 2014, 9:15 pm and is filed under Visitors, Yokohama. You can follow any responses to this entry through RSS 2.0. You can leave a response, or trackback from your own site.