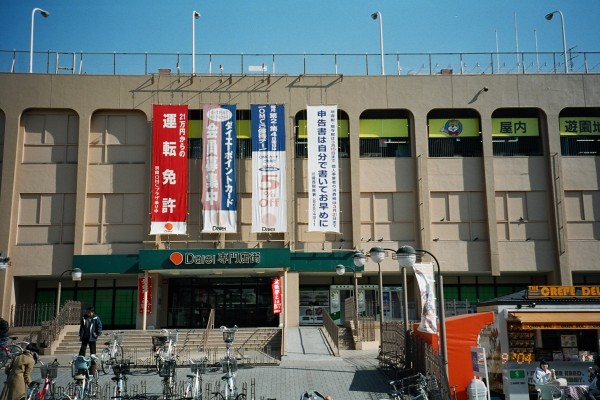 One of the most important places in the Noborito area was the Daiei Department store. The Daiei building contained a department store, 99 yen shop and grocery store, all of which were important for daily life in Hello House. The closest Daiei was about a 5 minute walk from Hello House, directly across from Mukogaokayuen station.

During my first week in Noborito I stocked up on stuff for my room at the 99 yen store. Over the next year I ended up buying a small floor couch that folds down into a matress, a small stereo, a Playstation 2 and other items to decorate my room. There was a small photo studio outside the main entrance that I used regularly. For those too young to remember, cameras used to require film. Once the film was used up, you needed to take it somewhere to get developed and turned into prints. I paid extra for digital copies of my pictures on CD.

The grocery store was the most common place that I visited at Daiei. It was a well stocked regular grocery store with a large deli section filled with ready to eat bentos and other food. The food was prepared daily, so it needed to be sold before the end of the day. Starting around 8:00pm, one of the employees would walk around with discount stickers for the food. Discounts would start at 10% and increase regularly after that to a maximum of 50%. It was not uncommon to see a crowd of hungry salarymen (and a few English teachers) following the discount sticker guy around the store.

The only downside of the Daiei store was the annoying music. Certain areas of the grocery store would have their own music that would play over and over until it was firmly stuck in your head. To this day I remember the songs for the meat and fish sections. The worst was the Daiei Hawks victory song. Deiei used to own the Daiei Hawks baseball team, who are now known as the SoftBank Hawks. In 2003 The Hawks won the Japan Series title and the store did nothing but play the stupid Hawks song on repeat. I feel bad for the employees who had to endure the song day after day.

Having a department store nearby was one of the great things about living in Noborito, and went a long way in making my time in Kawasaki enjoyable.

This entry was posted on November 24, 2013, 9:00 am and is filed under Greater Tokyo Area, Life in Japan. You can follow any responses to this entry through RSS 2.0. You can leave a response, or trackback from your own site.