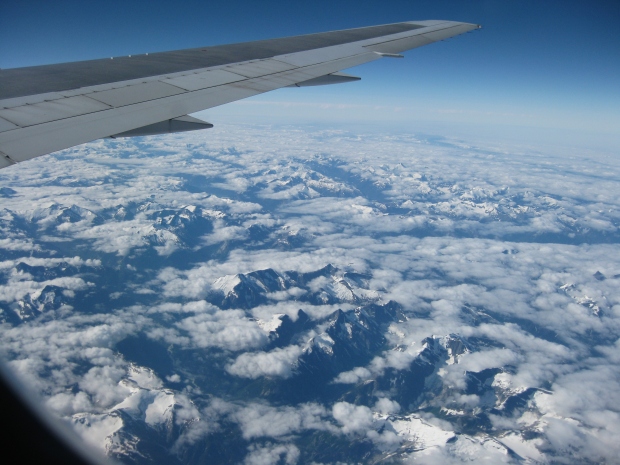 After two weeks of a fantastic vacation, it was (unfortunately) time to return to Canada. The Wife and I had spent the previous day packing and finishing our souvenir shopping. On the morning of the 21st, everything was ready to go.

The Wife and I each had one large suitcase, one backpack, and shared a box with extra stuff that would have put the suitcases over their weight limit. The challenge was getting all of these objects and 4 people to the airport in a Toyota Vitz hatchback. The Vitz is the Japanese version of the Echo, and is not exactly a cargo vehicle. Despite our epic Tetris skills, there was no way that everything and everyone was going to fit in the car at the same time. We ended up sending the ladies by train from Ooka to Numazu, and the men loaded the car and drove to the station.

For the trip from Numazu to Narita Airport we opted for the airport bus instead of the train. I prefer trains myself, but the bus is much more convenient when transporting large bags. As the poor driver tried to load our heavy bags into the bus, we said our good-byes to The In-Laws and Happyko, who had come to see us off. The In-Laws, being Japanese seniors, are not usually very huggy people. I am Canadian, so I gave the Mother in Law a nice big hug before getting on the bus. I do know my limits, and was pleased with a nice handshake from The Father in Law, which is about as touchy feely as he ever gets. We boarded the bus and waved out the window as everyone tried to pretend not to be sad.

The airport bus does present some different scenery than the train. We took the Tomei Expressway to the Greater Tokyo Area, then went right though the center of the city, passing through Shinjuku, Shibuya, Roppongi, close to the Imperial Palace, near Skytree then eastwards through Chiba. I did get some good pics from the train that I posted on my Tumblr here.

At the airport easily found the Air Canada check-in. It was the most crowded and disorganized check-in area in the entire airport. We were able to identify at least 4 separate lines with no dividers between them: one line for one line for the self serve check-in machines, one line for the baggage drop, one line for “check-in assistance” and one VIP check-in line. We had checked-in online the day before, but didn’t have a printer to print boarding passes, so none of the lines applied to our situation. Every employee we asked directed us to a different line. Finally we just got into the bag drop line and hoped they could figure it out. In the entire crowd, nobody really knew where they were supposed to be. This led to a lot of multilingual “which line is this” conversations. Just when we got to the “front”, we saw a sign informing us that our luggage cart was not allowed. Faced with the thought of one of us managing all the bags while the other returned the cart to the correct place, we decided to just abandon it next to the throng of people.

Around this time, Air Canada realized that there were about 4 VIP check in staff with nothing to do, and about 150 people lined up for the regular people check-in area. We were taken over to the VIP area and everything was finally figured out. We do appreciate the gesture, but it should have been done about 15 minutes earlier. It should be impossible for any company to be that disorganized in Japan.

When we boarded the plane we found ourselves surrounded by what we assume were Junior High school students or possibly High School students from Japan on their way to Canada. Apparently the only Japanese speaking flight attendant was working business class, leaving the English speaking attendants to try to convince the students to turn off their electronic devices and take out their headphones using only English and hand gestures. Trying to get a teenager to turn off their electronic devices is a challenge even without a language barrier.

As we started our long taxi to the runway, The Wife and I quickly realized that most of the students had never flown before. One of the students was even asking if we were flying yet after 15 minutes of waiting in line on the ground. We prepared ourselves for what would be a hilarious takeoff. The students did not disappoint, sounding more like they were on a roller coaster than an airplane as we gathered speed and left the ground. As an experienced flier, I can understand that people are nervous on their first flight. But the mass of students seemed to feed off each other’s nervousness.

During the flight, I watched Wreck It Ralph (for the second time), The Incredible Burt Wonderstone, and Sunset Boulevard. Like the flight to Japan, we were served something that slightly resembled food, if it had been prepared by an alien race whose only knowledge of Earth food came from the pictures in old magazine ads.

The flight was very smooth until the start of our descent into Calgary. We hit our first pocket of turbulence, which started a wave of minor screams from the students. Every bounce and every dip was accompanied by a “WAAAAAH!” from the entire back of the plane. I finally gave up all pretense of not laughing at their expense when I put my hands in the air and said “whee!” during some of the bigger bumps. When you have been sitting in a tube for 10 hours you need to make your own fun.

Other than a plane full of novice fliers, the best part about returning to Canada from Japan is the time travel. We left Narita airport at 5:00pm on July 21, and landed in Winnipeg at 4:55pm on July 21. Yes, we actually arrived 5 minutes before we left, no Delorean required. The concept is fun, but the experience really does mess up your internal clock for several days afterwards. I politely request that Hollywood build the concept of jet lag into future time travel films.

Our 2 week trip to Japan was fantastic. We got to spend a lot of time with family and friends, and had a few adventures along the way. I hope you enjoyed reading about it. It was good to get away, but it’s always great to be back in your own bed again, especially when that means you get to sleep next to your awesome wife for the second time in 2 weeks. There really is no place like home.

This entry was posted on August 22, 2013, 9:20 pm and is filed under Return to Japan. You can follow any responses to this entry through RSS 2.0. You can leave a response, or trackback from your own site.