Posted by Barniferous in Visitors on July 22, 2014

My parents, sister, and I got up nice and early, had a quick breakfast, and then set out for what would be our longest day of travel. Our goal was to go from Kawasaki to Hiroshima to see the Peace Memorial Museum, then back to Kyoto to set up a day of sightseeing.

My dad is not a fan of crowded trains, but due to the amount of distance we needed to cover we had to get on a busy rush hour train. It was my family’s first time to see the famous train pushers in action. My family stood by in wonder as they watched the uniformed rail staff pushing all of the arms and legs into the crowded train car. We were not looking forward to getting on one of the busy trains with our suitcases.

When we got on the train, I told my dad to stand by the door and look out the window. This way he could attempt to ignore the crushing crowds of people behind him. The technique worked, but he was still happy that it wasn’t a longer train ride.

The Tokaido Shinkansen offers three different trains; the Kodama, the Hikari, and the Nozomi. The Kodama stops at every station along the way. It also features the most amount of unreserved seats. The Hikari stops at fewer stations and has fewer unreserved seats available. The Nozomi only stops at the biggest stations, and has very few unreserved seats. My family was using JR rail passes, which allow for free reserved seats on everything but the Nozomi. Since I live in Japan, I am ineligible for a JR rail pass. My parents generously treated me to all of my train fare.

Traveling on the shinkansen is one of the coolest things about Japan. The electric trains are quiet, comfortable, and blast through the countryside at over 250km/h (150mph). The seats have more than ample leg room, which is convenient if you are bringing luggage. All of the announcements are in Japanese and English, and there are vending machines, pay phones and washrooms available at the ends of the cars. Shinkansen is truly the best way to travel long distances in Japan.

On the way I showed my parents my cell phone. Phone technology in Japan is at least 6 months ahead of Canada. My mom was very impressed that she could use my phone to send an email to one of her friends.

We arrived in Hiroshima just before 1:30pm. In the five and a half hours since we left Noborito, we had traveled about 900km (560 miles). This is even more impressive when you consider our half our stop in Shin-Osaka to switch trains.

One of the best things about visiting a new place is that even the most mundane things like public transportation become an adventure. For my family and I, our train trip was the most fun we ever had traveling for 5 hours.

(2014 Update) My phone at the time was a flip phone with a camera that could take pictures 120 pixels x 120 pixels. I could send emails and browse a very limited Vodafone network. I could send texts or emails using the letters on my 0-9 keys. It was primitive by today’s standards, but better than most people’s phones in Canada at the time. 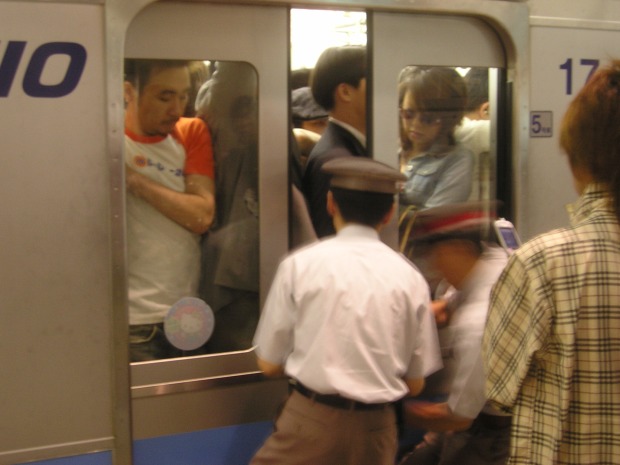 Pushing people onto the Keio line at Shibuya Station

I had to work today. The guys went to a sword museum in Tokyo, and then met up with me outside Kawasaki station at the end of my shift. They all requested another night out in Shibuya. We spent our time in game centers and then went back to Don Quijote, this time sober enough to fully enjoy the experience. Green and I both bought small beer chilling machines which claim to cool a beer from room temperature to drinking temperature in 90 seconds. For the price of 2000 yen this seemed like a reasonable gamble.

We got to Shibuya station a bit early to avoid any chance of missing the last train. Our route home was the always crowded Keio line to Shimokitazawa, and then Odakyu line to Noborito. When we got to the platform we saw the second last train loading up. It was literally wall to wall people. This gave us a chance to see Japan’s famous train pushers for the first time. They are railway staff that push all of the arms and legs into a crowded train car so the doors can close. If you want a true Japan cultural experience, you have to see the train pushers in action.

We went to the front of the line and waited for the last train of the evening to arrive. We were in the last train car standing against the back wall of the car in a row. I regretted my purchase of the beer cooling cube as I had to awkwardly straddle it while the train car filled up. By the time the train was ready to leave, the train car was packed like sardines and we were pressed up against the back wall. Due to my awkward straddling position, a nearby drunk man tried to use me as a seat.

The view inside the last train out of Shibuya

As we got moving, a drunk woman crawled between Flounder’s legs and started looking like she was going to be sick. Flounder described the situation to me as “It’s like a game of leapfrog, but nobody’s jumping!”. Everyone in the area who could understand language was laughing at the situation.

When we got closer to Shimokitazawa station, I instructed the guys that we had to get off the train quickly and run to Odakyu line. I let them know that we only had a few minutes to make our connection before the Odakyu line left. I made very clear to them that if they didn’t get off the train before the doors closed, that they would have no way of getting back to Hello House.

At Shimokitazawa the doors opened and a crowd of people started flowing out of the train. Japan is a usually very polite and orderly country, except on crowded trains. When the train is crowded, anything goes. Hippie, Code Red, Green and I all forced our way off the train, but Flounder was trapped behind a man who stood directly in the doorway with his arms crossed.

Flounder, hearing the urgency in my voice, decided that desperate times called for desperate measures. He tried to go left – not enough space. He tried to go right – too crowded. He then grabbed the door blocker by his elbows, picked him up, and carried him off the train.

The door blocking man was furious at being picked up like a toy and moved out of the way. He turned around angrily and found himself staring directly into the middle of Flounder’s chest. As he slowly looked up at the giant smiling gaijin, he decided that he wasn’t all that angry anymore and quickly got on the train without a word. The nearby people on the platform thought this was hilarious. Flounder simply shrugged and told me “you said I had to get off the train now”. We all continued laughing as we ran for the Odakyu line to catch the last train back to Hello House.

Description on the beer cooling machine:

Drinking a glass of beer helps yourself release fatigue and mental stress after you come back home. Just pull down the lever and get a chilled canned beer for your relaxing time. COOLING CUBE creates a healing time and space beyond reality for you. Since 2002.