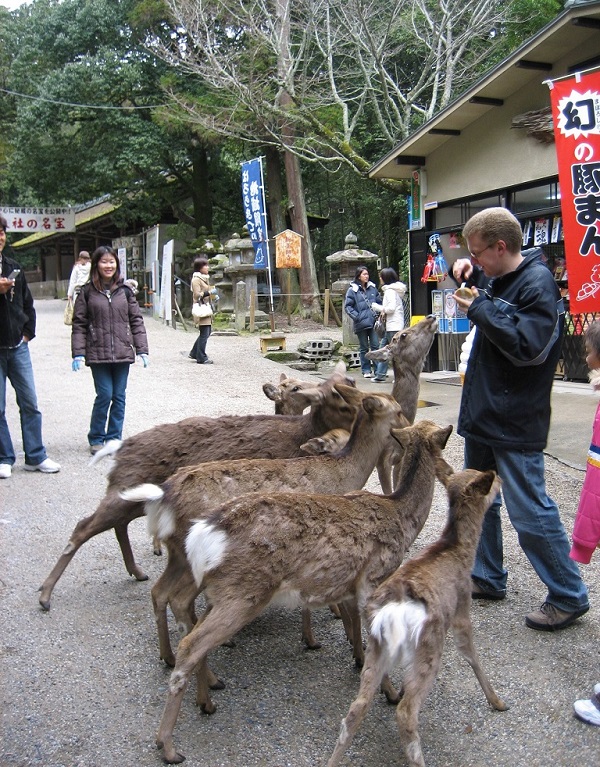 Other than some very old shrines and temples, Nara is famous for the deer in Nara Park. The deer roaming the park are considered sacred by the local shrines, and they are allowed full reign over the park.

The deer are generally tame, and will completely ignore you until you walk up to one of the many vendors in the area and buy deer crackers. As soon as you pay your 150 yen for the small package of crackers, you will instantly find yourself surrounded by hungry, insistent deer who will all gently headbutt you when you aren’t feeding them. As soon as the crackers are gone, the deer will return to ignoring you.

The whole experience is a bit intimidating at first. We did see a few parents laughing after handing a stack of deer crackers to their unsuspecting children, which I personally thought was hilarious!

Because the deer are wild animals, there are some helpful warning signs around the park that remind you of deer safety. Helpful that is, if you can read Japanese. 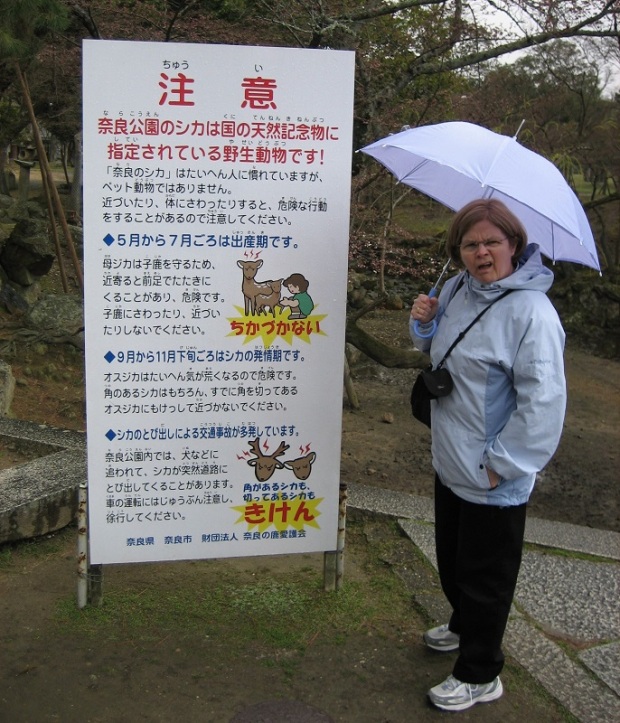 I could read just enough to understand that the deer are not pets, and there are certain times of the year when the deer may be aggressive. I personally don’t need a sign to tell me not to piss off wild animals that are used to getting their own way, but I understand that this may be important for some. Fortunately for me, the worst thing that happened in my interaction with Nara’s deer was getting some deer snot on my jacket.

We would have spent more time in Nara, but the day was cold and it started raining. Since most of the sightseeing places involved walking outside, we decided to head back to Osaka for some indoor exploration.

Feeding the deer in Nara should be on everyone’s western Japan to-do list. It was a really cool experience!

This entry was posted on August 14, 2016, 1:51 pm and is filed under Visitors, Western Japan. You can follow any responses to this entry through RSS 2.0. You can leave a response, or trackback from your own site.