Today my parents and I did some sightseeing in Osaka. We started our day with breakfast at the hotel (with a restaurant full of our new friends), and then headed off for Osaka Castle.

Japan is filled with old castles, and most of them have been destroyed and rebuilt several times. Osaka Castle is no exception; the main tower and surrounding buildings have been destroyed and rebuilt many times over, with the most recent restoration in 1995. After seeing Himeji Castle twice (which was never destroyed), I wasn’t sure that I would enjoy Osaka castle as much. I ended up being  pleasantly surprised.

The current version of Osaka Castle is a restored exterior with a modern museum inside. The museum tells the story of both Osaka and Osaka Castle, which was played key roles in the struggle to reunify Japan in the 1500s. The museum was interesting and interactive, and featured excellent English signs.

We explored the castle for a few hours, and then headed towards the obligatory gift shop near the exit. Outside the gift shop is a giant golden tiger and a box full of samurai gear so you can pose for a picture. There were a lot of Japanese people standing around, looking at the tiger and cool samurai clothes, obviously wanting to take a picture, but nobody wanted to be the first person to step up. Fortunately my dad was there to bravely volunteer: 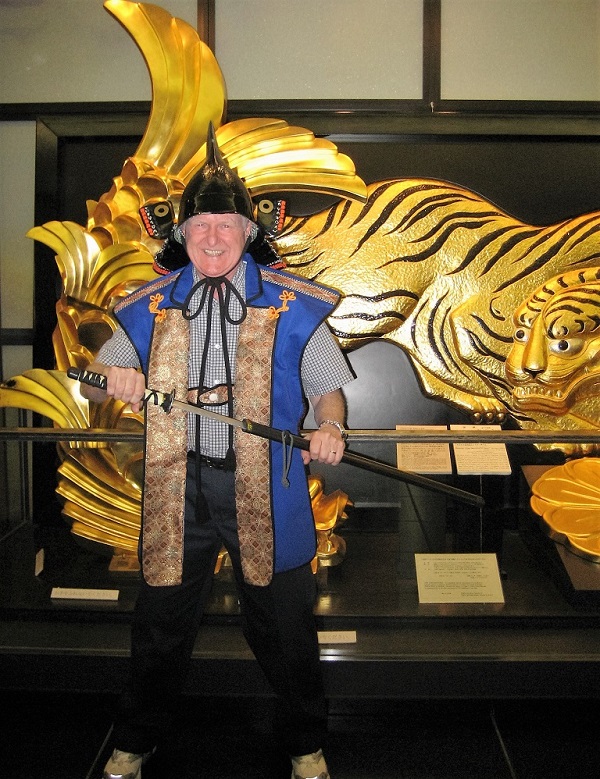 My dad had just traveled half way around the world and was in a modern restoration of a 500 year old castle. I don’t think anything could have stopped him from getting a picture with a fake sword in front of a golden tiger. The crowd of Japanese people, now happy that none of them had to go first, formed an orderly line to dress up and take pictures.

This is exactly the kind of thing that would have embarrassed me when I was a grumpy teenager. However, as a 27 year old I realized that my dad was actually pretty cool, not to mention fun to travel with.

Next up, Osaka Aquarium!

This entry was posted on August 11, 2016, 1:00 am and is filed under Visitors, Western Japan. You can follow any responses to this entry through RSS 2.0. You can leave a response, or trackback from your own site.