Disclaimer: UPS is the nickname of one of my friends visiting Japan. This post has nothing to do with United Parcel Service.

After an eventful evening in Roppongi where we drank at 5 different bars, UPS and I were looking for a place to sleep for the night. I was happy to find a nearby hotel, but UPS insisted that on his last night in Japan he wanted to stay in a capsule hotel.

A capsule hotel is a cheap option for a place to sleep if you don’t have a problem with small spaces. Instead of a room, you rent a small capsule to sleep in for the night. I had heard of capsule hotels before I moved to Japan, but had never stayed in one. In the interests of being a good host and trying new things, I agreed and decided to use my Japanese language skills to find us a capsule hotel.

We walked towards the big Koban across from Roppongi station. The police officer at the front appeared a bit nervous as we approached, probably because he had interacted with more than his share of drunk foreigners in English before. He appeared to relax when I greeted him politely in and managed to ask him where the nearest capsule hotel was in decent Japanese. This was particularly impressive considering the amount of beer I had consumed over the evening. The officer told me that there were no capsule hotels in Roppongi and that I would have better luck in Shibuya. Since the trains had already stopped, he pointed out where the nearest taxi stand was. I thanked him and we were on our way.

The taxi driver did not seem too pleased about transporting two obviously drunk gaijins somewhere after 2:00am. We were fascinated by the street level view of one of the world’s biggest cities. The cab ride didn’t take long and cost about 1200 yen ($12).

We got out at the Hachiko exit at Shibuya station, and I asked directions from a nearby Koban while UPS hung out at the famous dog statue. Hachiko is a well known meeting place, and after explaining the story I got a picture of a very tired looking UPS next to Japan’s most loyal dog. We set out for a large capsule hotel building called “Capsule Land” which was just up the street. 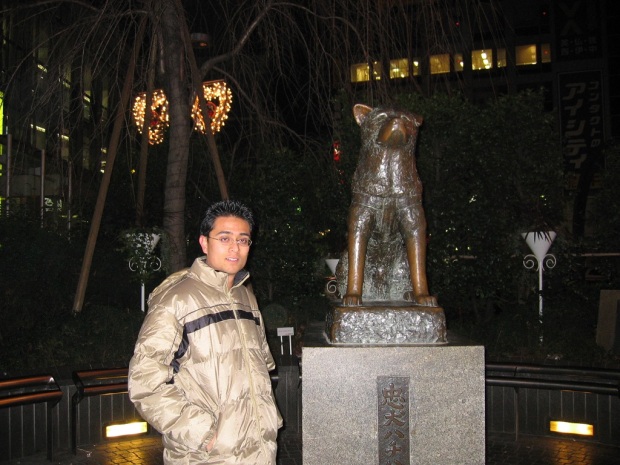 On the way we had another interesting encounter; UPS managed to get propositioned by a street prostitute. For real.

I didn’t even think there were any street prostitutes in Japan, so this was all the more surprising. As we slowly walked up the hill, she said “hi”, put her head on his shoulder, and said in an adorable voice “Sex? Sex??”. UPS said no thank you. She nodded her head yes while saying, slightly more confidently, “Sex! Sex.” this time as a statement, not a question. We somehow politely removed ourselves from her rather pleasant company and laughed about the ridiculous situations we had experienced during the evening while we continued walking to Capsule Land.

There aren’t too many other situations where talking to two police officers and a hooker would constitute a good evening. I love having visitors!

This entry was posted on May 12, 2016, 11:42 pm and is filed under Drinking, Friends and coworkers, Visitors. You can follow any responses to this entry through RSS 2.0. You can leave a response, or trackback from your own site.