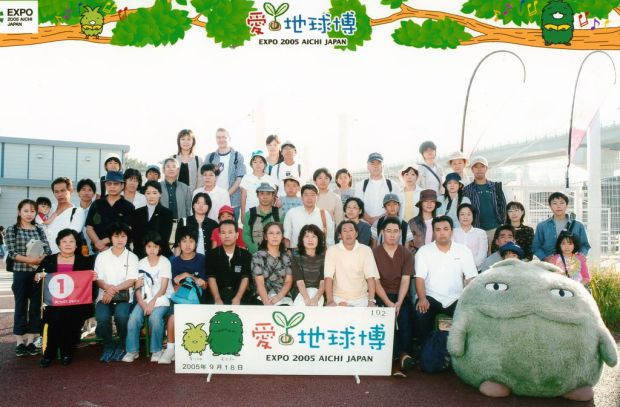 Today I went to Aichi Expo with The Penpal and her parents. Expo is a world fair, with pavilions from 121 different countries, and also some large corporate pavilions as well.

The Penpal’s parents booked us a tour package that included bus transportation to and from Expo and a full day pass. The Expo grounds are 230km from Numazu, and we had to make a few stops along the way. That meant that the bus left from the north side of Numazu station at 3:55am.

I woke up at 3:00, had a quick shower, and The Penpal and her family came by in a taxi to get us all to the station on time. Most people slept on the bus, but sleeping on the bus is nowhere near as restful as sleeping in a comfy, comfy bed. We got to Expo just after 8:00, and got a group picture after everyone got off the bus. The result is above, and the only two people smiling are The Penpal and I (back row, I am the only non Japanese person).

After the grumpiest group photo ever, we all rushed towards the entrance to wait for the gates to open. It was already hot, and the crowds were intense. Fortunately Japanese people are good with lines, so the massive crowd of people was orderly and polite.

We spent a full day at Expo, walking around in the heat, waiting in various lines to see different pavilions. We ended up going to Canada, USA, Mexico, Turkey, and a few others. The corporate pavilions had waiting times between 4-8 hours each. As much as we wanted to see the awesome robots that can play the trumpet, we had no interest in standing in line for that long to see just one display.

The Canadian pavilion featured interactive displays about the country, which The Penpal’s parents found interesting. As a rule, Japanese people know well about the US, but not nearly as much about Canada. One of my highlights was seeing a live performance by a band called Blou. They play Acadian party music, and managed to get the entire crowd up and dancing in 35 degree heat.

Yes, I am rocking the classic Winnipeg Jets logo

There were a lot more things to see, but with the crowds and the heat, we really took it easy and limited ourselves. Also, you can only go to so many things when there is a 45 minute wait for the women’s washroom! We nicknamed the women’s washroom “toilet pavilion” because it had the same kind of line as many of the countries.

After a long, hot, crazy, crowded day, we all got back on the bus in the evening and got back to Numazu station before midnight. I am happy that I got to spend the day with The Penpal and her parents, but if I was going to do something like this again, I would break it into two days and stay in a hotel.

This entry was posted on September 18, 2015, 8:00 pm and is filed under Life in Japan, The Penpal. You can follow any responses to this entry through RSS 2.0. You can leave a response, or trackback from your own site.