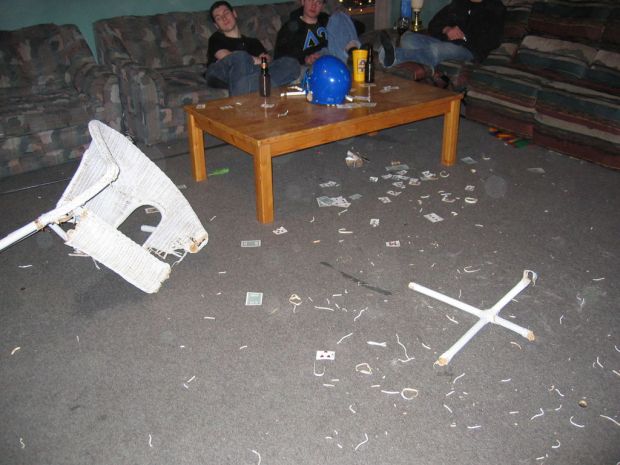 The aftermath of a man vs. chair grudge match

I started my day in Portage la Prairie with a visit to my old employer. I had worked there for several years during University, so it was good to drop in and say hi to my old coworkers. Naturally I brought donuts. I missed Canadian donuts.

In the afternoon I went to Winnipeg to hang out with the fraternity guys. I joined them for a group outing at a place called Xtreme Tactics. For the rest of the afternoon we chased each other around an indoor maze shooting each other with Airsoft pellet guns. I had played paintball before but never done indoor Airsoft, which is why I was not appropriately dressed for the occasion. I ended up with some nasty welts on my arms.

After spending the afternoon shooting each other, we all went to Boston Pizza for dinner and then returned to the fraternity house for the Brotherhood Bottle Exchange.

In Delta Upsilon, new members are assigned a “big brother” when they join. The big brother is an existing member who is supposed to guide the little brother in the ways of the fraternity. At the brotherhood bottle exchange, big brothers and little brothers exchange bottles of alcohol and then everyone hangs out for some beverages and brotherhood. It was a great chance for me to catch up with my friends and hear some fun fraternity stories.

During the course of the evening, the following events may or may not have happened:

It was a good time for everyone except the chair.

This entry was posted on December 23, 2014, 8:00 pm and is filed under Drinking, Return to Canada, Shenanigans. You can follow any responses to this entry through RSS 2.0. You can leave a response, or trackback from your own site.