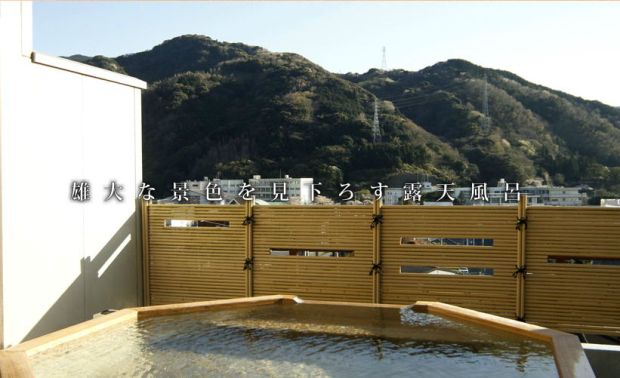 The Penpal and I left Mishima and headed south towards Izu Peninsula. Toi is on the west side of Izu Peninsula. The peninsula is full of tree covered mountains with small towns along the coast and in some of the flatter areas in the middle. The Penpal has a friend who lives in Toi, and wanted me to meet her. The friend was excited to introduce me to her young son. I would be the first foreigner that he ever met. The concept of “wow my son is going to meet his first foreigner today” may seem a bit strange to people outside of Japan, but I have been hear almost a year so it doesn’t seem unusual anymore.

We had a nice visit at their house, and then moved on to our next destination, Ryokan Ooya. A ryokan is a traditional Japanese inn. The rooms have tatami mat floors and sliding wooden panels. Everyone wears yukatas, and they serve traditional Japanese food. When we checked in, I learned that I was the first foreigner to ever stay at Ooya. The Penpal knew the owner’s family, so we got upgraded to a huge room.

Our dinner was served in the room by yukata clad ladies. They started bring tray after tray of delicious looking seafood, soups, and things I had never seen before, all laid out on fancy decorative plates. It was simply the most beautiful food I had ever seen. There was probably enough food for four people, but the meal was all for us. We did our best but couldn’t finish everything.

After dinner, we had a reservation for one of the private outdoor baths. Reservations could be made in 30 minute blocks. Like most Japanese baths, we had to clean ourselves first, and then sat in neck deep hot water. Between the relaxing water and the amazing view, our 30 minutes went by very quickly. Thanks to the food and hot outdoor bath, it was an early night.

This entry was posted on August 31, 2014, 12:59 pm and is filed under Shizuoka, The Penpal. You can follow any responses to this entry through RSS 2.0. You can leave a response, or trackback from your own site.