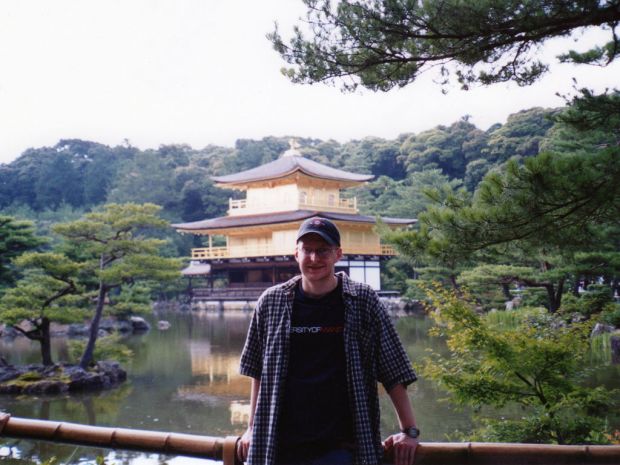 Me at Kinkakuji. Please note the Winnipeg Jets hat and the University of Manitoba shirt.

My family and I spent the day exploring parts of Kyoto, which was the capital of Japan until 1868. Kyoto is home to some of the oldest and most famous historical buildings in Japan, making it a very popular destination for tourists. All of the main tourist areas offer service and signs in multiple languages. Getting around is easy, with a small subway system and very well labelled buses. Tourist maps are available showing the location of all of the major tourist sites.

On our day in Kyoto, we went to three places: Nijo Castle, Daitokuji and Kinkakuji.

Nijo Castle in central Kyoto was our first destination. I love castles, so I made it a point to get Nijo on our itinerary for the day. Nijo is not the typical giant stone building that looks out over the land. It is a series of one story structures connected together, surrounded by beautiful grounds and a moat. My favourite feature of the castle was the nightingale floors – floors designed to squeak at the slightest touch. These floors were installed as a security feature so you could hear people coming.

From Nijo Castle, we went to north Kyoto to see Daitokuji – a large temple complex with several sub temples. I can’t remember the names of the places we went within the Daitokuji complex, but we did see a traditional zen garden with combed rocks. It was very relaxing.

Our main event of the day was Kinkakuji, the golden pavilion. Kinkakuji is by far the most popular tourist spot in Kyoto for foreign visitors. It is a Buddhist temple on a lake covered in gold leaf. The golden shine is striking, and easily visible from a distance. The original temple was founded in 1397, after being converted from a wealthy businessman’s villa. It was destroyed in the mid 1400s during the Onin war and rebuilt. In 1950, the temple was burned to the ground by a mentally ill monk. The current structure dates from 1955.

While foreign visitors love Kinkakuji, most Japanese people prefer the similarly named Ginkakuji, the silver pavilion. The name is deceptive – the original plan was to cover the structure with silver foil similar to the gold foil covering on Kinkakuji, but the covering was never finished. The difference in preference between the two temples illustrates the Japanese concept of “wabi-sabi”, which is a concept nearly impossible to translate fully into English. The best explanation of wabi-sabi that I ever heard was from The Penpal: a new stone carving is beautiful, but Japanese people think it’s more beautiful if it has been exposed to the elements for years and has some cracks.

It’s interesting to me that a country that strives for perfection in nearly everything also values the beauty in imperfections. I have learned a lot about Japan and it’s culture, but I don’t think I can ever truly understand everything. I can appreciate a peaceful rock garden however; they are the best.

This entry was posted on July 27, 2014, 11:44 pm and is filed under Visitors, Western Japan. You can follow any responses to this entry through RSS 2.0. You can leave a response, or trackback from your own site.