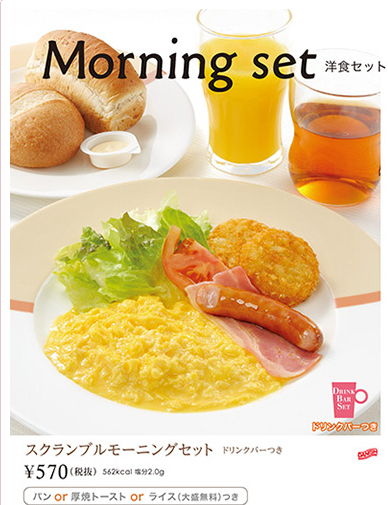 One of the breakfast options at Jonathan’s

In the morning I gathered up my family and we went for breakfast at Jonathan’s, a family restaurant near Mukogaoka Station. Jonathan’s has a breakfast menu with some familiar foods that I thought wouldn’t scare my family. They were a little surprised that the standard eggs and meat breakfast came with salad instead of some kind of potatoes.

After breakfast we spent a few hours exploring the nearby Daiei store. Supermarkets in other countries are always interesting. Like my other visitors, my family commented on the huge fish section and small meat section, which is exactly the opposite of supermarkets in central Canada.

My family wanted to have a fairly uneventful first full day in Japan. After exploring the neighbourhood and stores around the Noborito area. we headed back to Hello House. My parents wanted to have a nap before our evening plans of dinner and a movie. My sister and I went to wake them up two hours later from a deep sleep. They woke up confused and disoriented, believing it to be morning instead of evening. First time jet lag is terrible!

After finally convincing my parents that it was still Monday afternoon, we all walked to Noborito station and took the Odakyu line to Shin-yurigaoka station. There is a large shopping area and movie theatre near the station, with lots of good restaurants. Our first stop was the movie theatre to get tickets for later. My parents and I got tickets for Harry Potter 3, while my sister got a ticket for The Day After Tomorrow (she had already seen Harry Potter). The family was pleasantly surprised to see that the theatre offered reserved seats, so we wouldn’t have to rush back and line up before the movie.

We wandered through the huge selection of restaurants in the department store’s upper floors. My mom and sister wanted noodles, but my dad wanted something with meat. Fortunately the restaurants had a ticket system, so he would not need to communicate with anyone.

Restaurants with a ticket system are common in Japan, usually in train stations or other areas with high customer volumes and limited menu options. You simply insert money into the ticket machine and then push the button corresponding to the food you want. The machine will return a ticket with your order. After you have your ticket, you can sit anywhere in the restaurant and present the ticket to the waiter that comes by. Within minutes you will have your food.

I helped my dad buy a ticket from the machine, and took my mom and sister to get some noodles. In Canada there is a perception that Japanese portion sizes are small. They were shocked when the waitress returned with bowls of soup large enough to bathe a baby in. (author’s note – do not bathe a baby in soup).

We met up after dinner and returned to the movie theatre. I translated the snack menu, which was easy because it was mostly in katakana. When I got to the drinks I noted that beer was available. My dad asked if I meant actual beer, the kind with alcohol. I told him yes, they sold cans of Asahi Super Dry. With a huge smile on his face my dad got me to order him a can of beer for the movie.

The movie, like the others in the Harry Potter series, was fantastic. I tried to read as many of the Japanese subtitles as I could while watching. My dad smiled the whole time while sipping on his can of beer. After the movie we returned to Hello House and called it a night.

It was a great first day in Japan for my family.

This entry was posted on July 2, 2014, 8:39 pm and is filed under Life in Japan, Movies, Visitors. You can follow any responses to this entry through RSS 2.0. You can leave a response, or trackback from your own site.