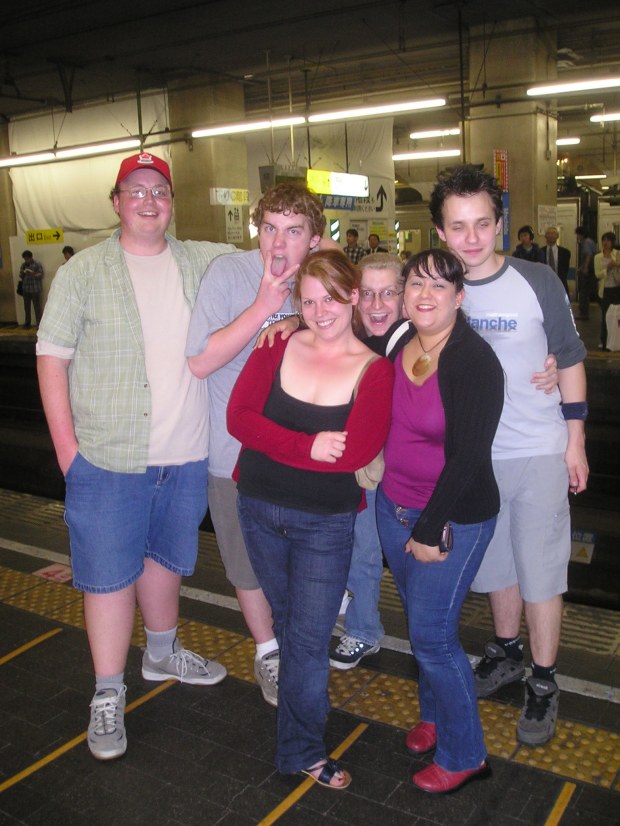 Flounder, Green, Lux, Me, Zoe, and Code Red after too much booze at Machida station

During the day we hung out in my room playing Playstation games and generally recovering from our adventures so far. In the evening we had plans to go to a family restaurant in Machida. Most family restaurants in Japan feature a “drink bar” for about 200 yen. A drink bar is a self serve soft drink area where you can enjoy free refills of coffee, tea, sodas and water. This particular restaurant also featured a 600 yen drink bar with alcohol. You read that correctly: for the low price of 600 yen a customer can mix their own cocktails. I think the intent is for customers to have one or two drinks with dinner, but there is technically no limit.

Yes, this does sound like a terrible idea in the making.

Lux and Zoe were going to accompany us to the restaurant. Before we left they took me aside and expressed concern that my friends would be in the restaurant all night taking advantage of the unlimited alcohol. They suggested telling the guys that there was a one hour time limit on the drink bar. I disagreed and tried to explain that the idea of a time limit would only lead to problems. I explained that I knew these guys, and a time limit would be a challenge to them. Lux and Zoe continued to disagree with me, so eventually I told them I would play along, but I assumed no responsibility for the outcome.

We all boarded the Odakyu line for Machida, and explained the “rules” of the drink bar. The guys were all very excited and started asking questions about when the one hour time limit started – from the time we sat down? from the time we order? I told them I would get the details at the restaurant.

We got a table for 7 and placed our orders. As soon as the orders were taken, everyone rushed the drink bar and started mixing drinks. We started slowly, with everyone checking their watches. By about the 30 minute mark there was always at least one of us refilling their drink at any time. For the last 10 minutes I am pretty sure that Green did not return to his seat at all. We all left full of delicious food and booze for under 2000 yen per person.

When you drink a large amount of alcohol in a short time, you can go from feeling completely sober to drunk in a matter of minutes. This happened for most of us on the walk from the restaurant to the station. We passed two large gaijins walking in the other direction. Code Red asked if they were Canadian like us, and the said that no, they were American Marines. Code Red responded “Go Yankee Go!”, to which Flounder added “home”. Our military friends did not take kindly to this, and suggested they would meet us later. Code Red, missing the implicit threat in the comment, answered “awesome! We will see you guys later!”. The marines clarified that it would not be a pleasant meeting. I believe Hippie and Code Red tried to apologize as we continued walking away.

By the time we arrived at the station, we were drunk and belligerent. While we waited on the platform, I noticed that a few train security officers watched our group from a distance. They seemed relieved as we boarded the train and ceased to be their problem.

When we returned to Hello House, Green removed his shirt and started walking around the house. Lux and I hung out on the stoop reflecting on the amount of alcohol that we all drank for 600 yen each. Eventually one of the other Hello House residents, a gay British male, came to the stoop to complain about Green walking around shirtless. His comment was “nobody wants to see that”.

all you can drink, Drinking, family restaurant, Machida, Marines

This entry was posted on May 31, 2014, 8:00 pm and is filed under Drinking, Greater Tokyo Area, Hello House, Lux, Team Awesome Sauce. You can follow any responses to this entry through RSS 2.0. You can leave a response, or trackback from your own site.