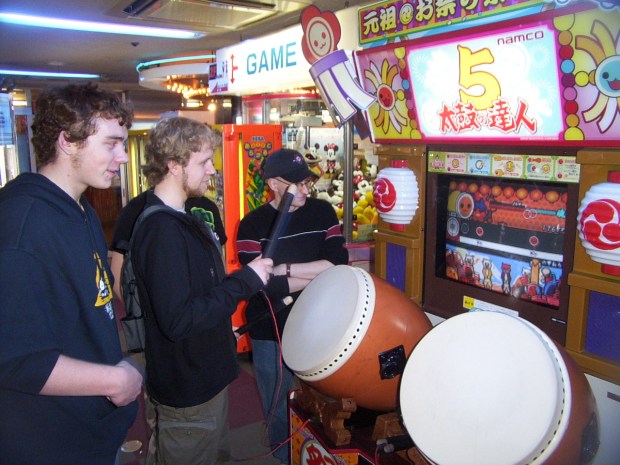 In the evening we decided to head out for some adventure. We started in a small game center (arcade) in Noborito. It was fun, but the selection of games was lacking. Seeking bigger and better things we got on the Odakyu line for Shinjuku.

Shinjuku at night is amazing. All of the tall buildings are lit up brightly, and the streets are full of people looking for restaurants, bars, and other good times. We spent some time in a big game center, with the main attraction being the awesome Taiko drumming game “Taiko no Tatsujin” which is pictured above. The game was a huge hit, and anyone from a complete beginner to a taiko master could enjoy it. We also enjoyed a fun version of “House of the Dead” called “Typing of the Dead”. Instead of using a gun to shoot zombies, you used a keyboard to type in the names that appeared in front of them. After spending time and money on video games, the guys requested to see something else. I told them that there was a red light district nearby, which naturally caught their attention.

I had never been to Kabukicho before, but I knew generally where it was. Combined with some street signs and maps we wandered through the congested, bright, bustling streets of Shinjuku. Before we went into the area, I told the guys that we were under no circumstances going to be going into any of the businesses in the area. I also warned them that there were likely to be aggressive touts vying for our attention. As soon as we passed through the famous gates onto one of the sketchier looking streets, we were approached by various men advertising different establishments and the services they offered. We were told in English about hostess bars with school girl themes, places where we could watch women showering, and one place where we could meet the attractive women on the sign and do “whatever we want”. One of the touts grabbed onto Hippie’s arm and tried to lead him into a place promising “titties that would change his life”. The only person in our group that received no attention at all was Flounder, who stood head and shoulders above everyone in the area. He was not approached by a single tout.

One quick loop of the area was enough, and we wandered around different parts of Shinjuku before calling it a night.

(2014 update 1) Starting in around 2006 there was a massive cleanup effort in Kabukicho that apparently cleaned up the area. I am sure that it is still an interesting place to walk through, but it likely won’t be the same experience we had in 2004.

This entry was posted on May 24, 2014, 5:00 pm and is filed under Team Awesome Sauce, Tokyo. You can follow any responses to this entry through RSS 2.0. You can leave a response, or trackback from your own site.