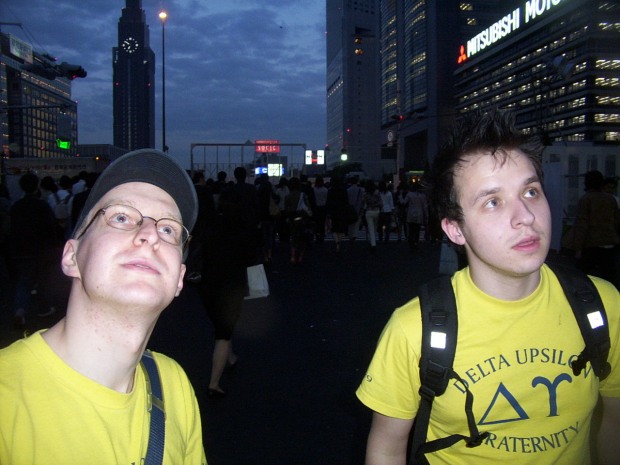 When the guys got back to Hello House, we organized the sleeping arrangements. Hippie would be staying on the foldy floor couch in my room, while Flounder, Code Red and Green would be sharing the extra room that I rented for their stay. Fortunately for them, the extra room had a bed. Flounder and Green agreed to alternate nights in the bed and on the floor, while Code Red set up a futon in the closet.

After unpacking, the travelers got their first experience with Hello House’s coin operated showers. After showers and a quick tour of Hello House, we set out in search of beer.

Since it was Friday night, all of the izakayas in the area were very busy. In my first three choices I was told that there would be a two hour wait, which didn’t work for us. As we walked from place to place looking for a beer, we attracted a lot of attention from the locals. It wasn’t often that they saw five enthusiastic gaijins walking around the Noborito area. One of the highlights came when I was not paying attention to where I was walking and managed to walk directly into a pole designed to separate the street from the sidewalk. The pole was just at the right height to hit me in my lower nether regions as I passed over it. The other highlight was a very drunk girl who started talking to us in English while her boyfriend held her up. When we told her we were Canadian she proudly replied “My friend is Canada!”.

We eventually ended up at an izakaya on the other side of Mukogaokayuen station that was full of hard drinking Japanese people. When I say hard drinking, I mean stumbling to the bathroom, puking, then coming back to finish their beer drinking. The frat guys approved. We ordered beer and izakaya food. Flounder and Green tried sashimi for the first (and probably last) time. After the bar we returned to Hello House to watch a bootleg copy of Wrestlemania while drinking some of the ample supplies of alcohol that the guys brought from Canada. It was a great first night!

(2014 update) It turns out that the izakaya staff were trying to tell me that there would be a 2 hour limit on our table, not a 2 hour wait. My Japanese was still pretty bad at the time.

This entry was posted on May 22, 2014, 8:00 pm and is filed under Drinking, Hello House, Team Awesome Sauce. You can follow any responses to this entry through RSS 2.0. You can leave a response, or trackback from your own site.