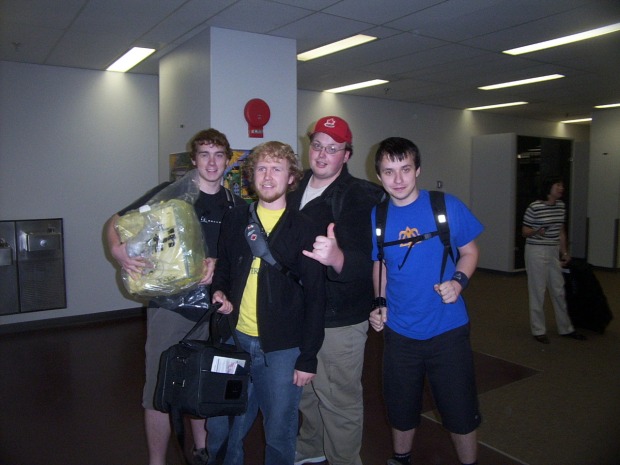 Over the next month you will get to read all about the crazy adventures when my fraternity friends came to visit me in Japan. They were only in the country for about two and a half weeks, but some days require multiple posts. This will also help bridge the gap before my next set of visitors.

When I moved to Japan, I put out an open invitation to my friends and fraternity brothers to come and visit anytime. Many were interested, but only 4 managed to get the time and money required for an international adventure. During their long flight they gave themselves a nickname which stuck for the rest of the trip. Faithful readers: please allow me to introduce to you – Team Awesome Sauce.

Green – if you look up “frat boy” in a dictionary, you will likely find Green. Never afraid to have another beer or remove his shirt in public. Eventual chapter president.

Hippie – so named for his flowing hippie hair. Possibly the most sensible one of the group, although that’s not saying much. Was eventually in my wedding party years later.

Flounder – bigger than a sumo wrestler, flounder was a former chapter president and world champion shit disturber. Also the only person I have ever met to successfully complete the 4 liter milk jug challenge.

Code Red – was considered the most likeable one of the group. Alternated between flat hair and an awesome attention getting mohawk.

This entry was posted on May 20, 2014, 8:00 pm and is filed under Friends and coworkers, Team Awesome Sauce. You can follow any responses to this entry through RSS 2.0. You can leave a response, or trackback from your own site.