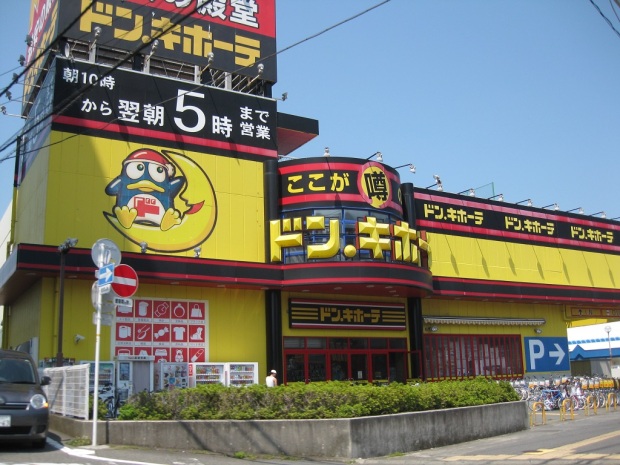 I had the day off due to a shift swap to help another teacher, so Lux and I went out to explore Tokyo. We started by going to Ginza, an upscale shopping area of Tokyo. It is home to some of the biggest and most expensive department store chains. Even the subway station looks nicer than other stations. We had very expensive coffee in a great place overlooking one of the major intersections.

After Ginza we moved on to Roppongi. Roppongi is very, VERY different in the daytime. We checked out the new massive Roppongi Hills complex, which features a 54 story building filled with very expensive shopping and restaurants, as well as several corporate offices. When a store only sells about 10 different high end purses and there are no prices displayed, it’s too expensive for English teachers.

After some wandering around we had dinner at TGI Fridays, which was just the same as back home except more expensive. Finally we finished off our day with our first ever trip to Don Quijote, one of the most fun stores in Japan. Don Quijote literally sells almost everything. DonKi Roppongi has 6 floors, all packed floor to ceiling with anything and everything you could ever want to buy. Finding a specific item is difficult to impossible, but wandering around is part of the DonKi shopping adventure experience.

Exploring Tokyo is a lot more fun with another person. We took a lot of pictures and had a great day. Also, we learned a valuable lesson that you should be careful – you never know who in the area can understand your language.

(2014 Update) I was still using a film camera at the time, and managed to confuse a full and empty roll of film, causing me to lose all of the pictures I took that day 😦

This entry was posted on May 4, 2014, 8:00 pm and is filed under Life in Japan, Lux. You can follow any responses to this entry through RSS 2.0. You can leave a response, or trackback from your own site.