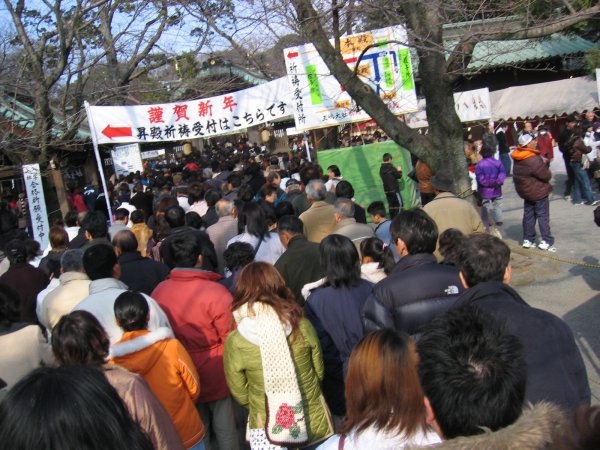 A crowd trying to celebrate New Year at Mishima Taisha

Today’s plan was to go to Mishima Taisha with The Penpal. I took the train to Numazu station to find The Penpal waiting for me. She walked up looking worried and told me that her father was waiting outside. Apparently he was off work, wanted to meet me, and offered to drive us to the shrine. I am generally pretty good with parents in Canada, but had no previous experience with Japanese parents. This was going to be a new challenge.

The Penpal’s Father greeted me at the car. We exchanged some pleasantries and the three of us got into the car. About a minute into our drive, he got the Penpal to ask me how old I thought he was. This was obviously a loaded question and I needed to come up with a reasonable answer. Guessing too high was out of the question, and if I guessed too low he would know I was lying. I masked my panic and decided to work this out logically. He looked to be anywhere from 45-65. The Penpal was 24 at the time, so if he was 25 when she was born then he would be 49. After redoing the mental math, I attempted to sound confident with my answer of 49 years old. He was actually 62, so he seemed pretty happy with my answer. Bullet = dodged.

With that out of the way, we went in the direction of Mishima Taisha but made a few stops first. The first stop was the rooftop parking of the new Seiyu department store in Numazu. It offered a good, unobstructed view of Mt. Fuji. After that, we went to Kakitagawa Park. It is a park next to a river where water comes underground from Mt. Fuji. The Penpal’s father treated us to some Green Tea ice cream and then we departed for Mishima Taisha.

Taisha quite literally means “big shrine” or “grand shrine”. There are only a few taishas in Japan. Since it was New Year, there were literally thousands of people trying to get into the shrine to pray for good luck in the upcoming year. On the approach to the shrine we passed a lot of food stands and souvenir shops, which gave the whole area sort of a carnival atmosphere. We got into the shrine itself, worked our way to the front, and dropped in coins to pray for good luck in 2004.

After leaving the shrine, we worked our way through the crowds to leave and find some lunch. Across the street was a van with a giant loudspeaker on top. The Penpal explained that they were a Christian group warning people not to go to the shrine and pray to false gods, recommending Jesus instead. It was an interesting scene to say the least.

We ate lunch in one of Mishima’s many small parks and exchanged slang from each other’s languages. Some time later a security guard approached us and told us that the park was closed. We apologized and he escorted us out of the park. We wandered around Mishima for a while and then ended up at karaoke again. Karaoke is fun – my singing isn’t getting any better, but I am starting to care less about how bad I sound.

It was a good day and I got to see a lot of new things, as well as spending time with the Penpal. On the way home I managed to sleep on the train, but waking up as my head hit the stainless steel handrail I was sitting next to. I am getting better at sleeping on a moving train, but am still in training.

(rewrote parts of the original post to add more detail)

This entry was posted on January 2, 2014, 8:00 pm and is filed under Life in Japan, The Penpal. You can follow any responses to this entry through RSS 2.0. You can leave a response, or trackback from your own site.