Life in Noborito – The Stoop 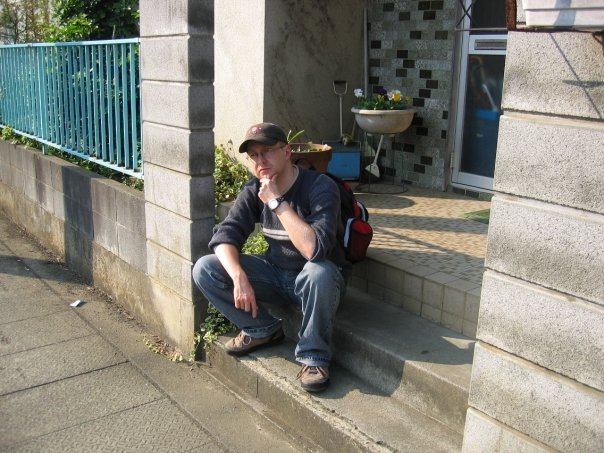 Other than the common living room area, there was one more hub of social activity at Hello House: The Stoop. The Stoop was the unofficial name of the front steps from the street to the main entrance of Hello House East.

Since smoking in a room with a tatami mat floor is very bad idea, the stoop was the de facto smoking area for Hello House. In addition to smokers, other people would hang out and chat, watching the residents come and go. I spent many nights hanging out with Lux on the front steps.

My favourite Stoop story involved a night where I was hanging out with Lux and likely a few other people. Hello House was down the street from a Hostess Bar that catered to middle aged business men. It could be argued that most Hostess Bars cater to middle aged business men, but this one definitely captured a 40-55 crowd with almost no exceptions. On one particular night, the hostesses were saying goodbye to a group of about 3 very drunk business men. The men were walking down the street towards Hello House, when one of them stopped to pee on the wall across the street.

Public urination is not entirely uncommon in Japan, especially among drunk businessmen (or English teachers). However, usually most people will take the time to go down an alley or somewhere away from people. Not this guy, he decided he was going to relieve himself directly across from a group of English teachers who were sitting outside. Lux decided that this was not appropriate behaviour and decided to loudly let the man know.

“HEY! That’s disgusting! I don’t come and piss in front of your house! Yeah you! I know you can understand me!!”

This didn’t slow the man down at all. If anything it gave him a little bit of a swagger when he shook out the last few drops and walked away.

Most of the time hanging out on the stoop didn’t involve entertaining public urination, but it was still a fun place to spend some time and chat with the other Hello House residents.

A note about the picture: I took this picture during a visit to Noborito in 2006, right before I left Japan. I am glad that I did, because not long after Hello House East and West were sold and flattened to make room for a new development. Goodbye Stoop! You are gone but not forgotten.

This entry was posted on December 12, 2013, 8:00 pm and is filed under Life in Japan, Lux, Shenanigans. You can follow any responses to this entry through RSS 2.0. You can leave a response, or trackback from your own site.